Having said to everyone that I don’t know what I want for my birthday, and I don’t need anything, and don’t bother wasting your money if I don’t want anything, I actually had a highly successful trip to the shops on Saturday and bought myself LOADS of cool stuff.

The coolest acquisition was these fucking excellent shoes: 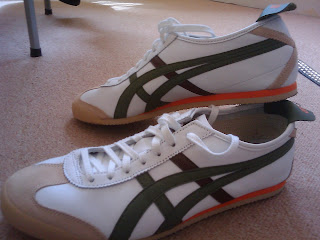 I’m wearing them right now and I looooooooooove them. They are Onitsuka Tigers, and I’ve wanted some for ages but always decided they were too expensive. They’re not too expensive when I’m not paying though! For some reason I really like the pattern on the side (most Onitsukas have it), and I really like the colours on these too.
I also bought Amelie on DVD, which I have seen quite a few times but which I really like. It’ll also be good for my French to watch it again too, I must be getting pretty rusty by now. I haven’t read anything in French or Italian for ages and I know I’d be a bit tongue-tied if I tried to speak them now. In fact, some people who are only occasional readers of my blog may not realise that I actually have a degree in French and Italian and am supposedly fluent, because obviously it doesn’t really come up very often when you spend your days pottering around doing (English) websites. I’m not fluent any more anyway, certainly not in Italian, although I could probably make an attempt at French and not sound too stupid.
Anyway, as well as Amelie I also bought Little Miss Sunshine, which I LOVE. I watched it the other night, I couldn’t wait until my birthday to see it again. The little girl in it is just SO sweet, and the people are all such fuck ups, and the ending is just hilarious.
So yes I’m pleased with my DVD purchases.
AND on top of that, I bought three t-shirts. So not bad really! It’s a nice feeling to come home clutching lots of shopping bags and knowing you’ve got lots of nice new things.
My plans for my actual birthday have been a bit last-minute (because I refused to decide what to do), but on Friday (my actual birthday) I’m now having people over to ours for booze and SingStar, and then we’ve got some friends coming to stay on Saturday and we’re going to go clubbing and be entertained by Boogaloo Stu at Pop Kraft.
So it should be good hopefully. I hope very much to keep my drinking in check and not get carried away like I usually do, so that I don’t suffer horribly the next day and end up spending my birthday weekend in bed or with my face in the toilet. That would be rubbish and would annoy me, so I must MUST remember to stop drinking at a sensible hour.
Will post some pictures of the weekend if any of them are stimulating enough.

In your FACE, Sony Ericsson
A catch up on some political stuff