No I’m not a fucking dormouse

I haven’t had much time for blogging this week, due to a combination of going out on staff jollies and actually being really busy at work. I know, me, busy, who’d have thought?
But anyway, I had a fun time last weekend on an Alice In Wonderland night out. It was our friend Alice’s birthday, and so she had decreed that the night out would have a dressing up theme in her honour. This was fine, except that as with all these things you have to say ‘dressing up optional’ so people aren’t put off. We like dressing up though, so we thought we’d make the effort, and here was the result of our labours: 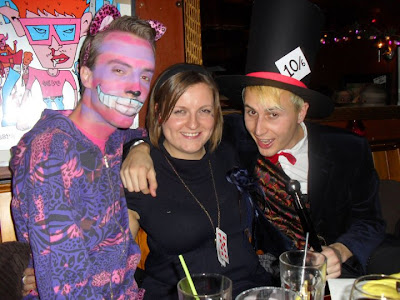 In case you can’t tell, I am the Cheshire Cat and Chris is the Mad Hatter. Pretty obvious, no? But apparently not to the people who said “Are you the dormouse?” to me on more than one occasion. Of COURSE I wasn’t the fucking dormouse, look at my smile! So I glared at them, but this was rather undermined by the perma-happy expression painted onto me.
Here’s another picture, complete with inflatable flamingo: 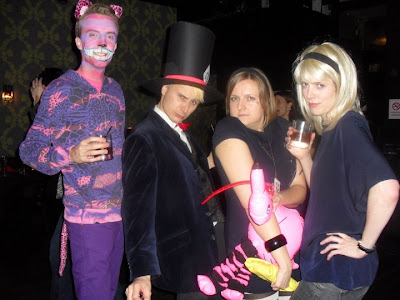 The other girl in it isn’t dressed up, but that didn’t stop someone saying “I like your wig” (it’s her actual hair) which amused me immensely.
Anyway, I mentioned that it was ‘dressing up optional’.
“There will be other people dressed up won’t there?” we said.
“Oh yes, don’t worry,” said Alice. “I’m doing face paint and everything.”
So we get to the pub and, er, NO ONE is dressed up. And we’re stood in a normal pub, full of bemused looking staff and clientele, me in a pink and purple stripey H&M fucking cat print hoodie, and all our friends saying “Oo your costumes are great”. Where the fuck are their costumes???
Alice is the one holding the flamingo. Can you see her face paint? It’s there, look again. She had painted a SPADE on her face. A spade from a deck of cards, not a shovel. And that was it! That’s not fucking face paint!
So I was mortified anyway, and sat in the furthest corner of the pub where people couldn’t see me.
A few other people turned up in costume later, and they’d made quite a bit of effort actually, but bizarrely they’d “only come out for a couple” and weren’t coming clubbing. Would you really get all dressed up in fancy dress just to come to the pub? So that was a bit odd anyway.
I had a good night once I got going, and we moved on to the Hanbury Club for We Love Pop after a while. I have to say though, £8 to get into the Hanbury Club is ABSURD. It’s only a little out-of-the-way kooky club. So I’m not going there again if they’re going to charge that for We Love Pop. It’s never that expensive for Pop Kraft, I don’t know how they can justify it.
Since the weekend I’ve had a fairly good week at work, but have been a bit rushed off my feet. This is good though because it makes a change from being bored.
We went on a nice staff social/jolly on Wednesday, in the form of a lunch out at Pinocchios and then a trawl around Brighton Museum. Everyone was horrified I’d never been to the museum considering you can nearly see it from my house, and actually I’m really glad we went because it was really, really good. I heartily recommend it to anyone looking for something to do for an hour that’s free (well, voluntary donation, i.e. free).
And now it’s Friday again and I don’t know where the week went. I might allow myself a little drinkie tonight (as you know, I hardly ever drink) as a reward for being so busy and important this week. I deserve it after all.