Milk you can’t drink and politicians you can’t trust

I have just realised to my horror that I haven’t posted anything on my blog for two whole weeks, so I thought I’d better do a bit of a catch up. I hate it when I click on someone’s blog and it hasn’t been updated for ages, it just looks a bit boring, so I’ve been a very bad superlative for letting it slip for so long.

Anyway, these are some of the things that I have been doing and thinking about recently: 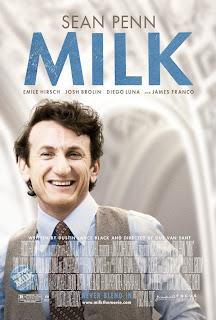 Milk
I watched Milk a couple of weeks ago, having previously known virtually nothing about it. I was aware that Harvey Milk was some sort of gay politician from San Francisco, but that was only really because I’d had a couple of drinks in a bar called Harvey’s when we were there, and they had information up on the walls about him.
Anyway, the film was GREAT, as was the story of his life in general. He was the first openly gay man to hold public office in the United States, and he was just so dedicated to improving the lot of gays and other minorities in his city. What was most shocking to me however was how recently it all took place: it is set from 1972 to 1978. Having been fortunate enough to grow up during a period when homosexuality started to be properly accepted in society, I hadn’t really realised how much I’ve taken for granted the freedoms I enjoy. In the mid-70s in San Francisco, it seems the police would regularly raid gay bars and arrest and beat up their patrons. This was the POLICE, the people you’re supposed to be able to call when someone assaults you! Even if homophobia was rife back then, I hadn’t really expected on duty police officers to be engaging in it.
Anyway, the film is about a lot more than just that, and although the ending is sad, I still found Harvey Milk’s courage and determination very uplifting. It made me feel like I could and should be doing more to overcome intolerance, and not just enjoy the benefits of the work done by others. I probably won’t of course, I’m fundamentally lazy and it was only a film, but it made me think at least and will keep me thinking in the future.
Political things
Sort of related to the above, I have been continuing to ponder my position as a gay man with semi-conservative views and the fast approaching general election. I still haven’t decided who I want to vote for, but I’ve still got a couple of months to go, and I’m quite enjoying researching the parties and thinking about it anyway. 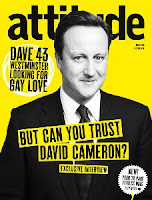 Attitude magazine has published an interview with each of the three main party leaders over its last few issues, and I’ve found that very helpful. I’ve taken everything the leaders have said in the interviews with a pinch of salt, because of course they’re just going to say whatever they think will appeal to the magazine’s gay readership, but it was useful to see them address those kinds of questions specifically.
Overall I’d say Nick Clegg came off the best. I don’t like Gordon Brown, so he would have had to say something very special to change my mind, and he just didn’t. David Cameron’s interview and the accompanying articles they published were tremendously interesting, but only made me less inclined to vote Conservative than I had been before. It made David Cameron look very much like a ‘will say what you want to hear’ politician, even more than politicians are in general, and it was pretty absurd to read him denying he’d voted against gay adoption even while they waved Hansard under his nose showing that he did. I’m not going to base my vote particularly on what his party did in the 80s, but the voting record of the current Conservative front bench is important and doesn’t make for good reading.
Nick Clegg seemed the most straightforward and honest, and said some nice things about equalities for gay people. My only reservation is that of course he can easily make generous promises: he’s unlikely to become prime minister and ever have to live up to them. Even so, I’d say the Lib Dems are currently winning in my estimations.
On top of that, there is a debate going on this week about a bill the government is putting through parliament and its section on sex education in schools. After intense lobbying by religious groups, the Labour party has allowed an amendment to let religious schools teach sex education (including mandatory information on same sex relationships) ‘within their institution’s ethos’. So that means religious schools would be free to say “Yes there are same sex relationships. These are wrong, they are immoral, and they are inferior to heterosexual love and marriage”. I’m absolutely appalled by that and think it would be a big step backwards for the country. Some gay activists are even calling the amendment a modern Section 28.
How would a gay child in that class feel to be told they are inferior and immoral? Shouldn’t they be free to be taught the facts of sex education without judgement attached, so they can make up their own minds? That seems like a fundamental right to me, and I really hope the amendment is removed. Labour have proclaimed themselves the only party that has championed gay rights over the last two decades, and this would be a terrible stain on their record.
General bits and bobs
This post is going on a bit now, so I shall cut the rest short.
I’m very much looking forward to our holiday to New York in six weeks. So far we have booked to tour the Federal Reserve Gold Vault, where you can view $8billion of gold all stacked up, and we have bought tickets to see Chicago on Broadway. Both of those should be really good.
Life is otherwise fairly good at the moment, but work is interminably dull and it is starting to affect my moods in the evening again. This feeling of unfulfillment I get creeps into my home life, and I become terribly listless and depressed. So anyway, I’m trying to be more positive at work, to fill my days with activity instead of endlessly clicking Refresh on Twitter, and to do some studying and other things in the periods when I really haven’t got anything to do. It’s worked for the last two days anyway, so I shall try to keep it up.