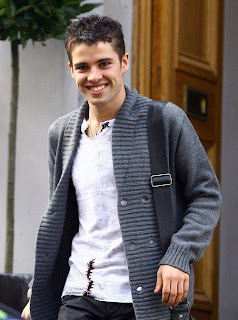 I’m not going to write loads about this, because I’m sure everyone has pretty much had enough of X Factor by now. I like watching the show myself, but after 3 or 4 months of it I do start think “God can please have my Saturday nights back now?”

But anyway, little Joe won in the end and I’m really pleased. Although I said I didn’t mind really which finalist one, Olly was always my least favourite, so once Stacey was out it had to be Joe for me really. I don’t know quite what he’ll be like in terms of longevity, as boys do really struggle to find a place in the charts I think, and I’m not totally sure what market he’s pitching himself at. If he goes for the mums like most X Factor boys do (Leon, Rhydian etc) then he’ll probably flop after a few months. A much better long-term prospect would be to go for the Will Young section of the market: girls, gay boys and a few Mums too. It won’t really be up to him though unfortunately, as the record label will just do whatever they think is most likely to earn them their money back in the short term, in the full knowledge that they’ll have another X Factor winner in a year so it doesn’t matter if he doesn’t last longer than that.
I kind of feel that he might rather have a career on stage instead of as a pop singer anyway – he’s got a very stagey voice and it seemed to be what interested him before he was on the show. Which is fine, Diana Vickers is apparently doing quite well on stage now, so if he does end up doing that then good for him.
The thing I’m most pleased about is that neither Danyl nor Jedward came even close to winning; beyond that I wasn’t that bothered. Danyl was just too much of a wanky twat, and Jedward made me feel physically sick. They’ve released the voting statistics now (available on Wikipedia) and at times it was a bit touch and go, particularly Week 9 when Danyl got eliminated. Joe was never in doubt by that stage though so it wouldn’t have made that much difference. And I’m quite pleased that my assertion that no one who is ever in the bottom two can go on to win was proven correct again.
So anyway, that was the X Factor for another year. I’m not that impressed by the single they’ve chosen, and I think it’s stupid that they pick the single and whoever wins has to sing it regardless of whether it suits them, but I don’t think they’re likely to change that. I’ve heard rumours that Dannii might leave and be replaced by Melanie B from the Spice Girls, which would be a shame as she’s a good judge. They should get rid of Louis if they’re going to get rid of anyone.
I think Joe should have released that Journey song he sang as it suited him much better. Maybe he’ll release that as a follow-up single or something.
Oo and I nearly forgot – Robbie Williams mucked up his own song!!! I was delighted, and had to rewind it and watch it again so I could enjoy it’s full glory. He looked like he was going to cry as he thought “shit, this was my chance to make up for my first crappy X Factor performance, and I’ve fucked my lyrics up and now look like a dick”. Olly should have refused to have him for his duet, if anything was going to be a drain on your votes it’d be performing with that fat faced drug-addled potatoman.
My favourite moments of the whole series though had nothing to do with the final, and everything to do with televised falling over humiliation. First was the majesty of Rachel Adedeji sucking carpet in front of Dannii Minogue: 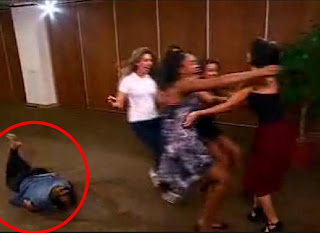 And then there was the beautiful moment when one of John and Edward fluffed their big entrance with a humiliating slip/trip while bursting through a paper screen. Only a full fall involving the loss of teeth could have made it any better: 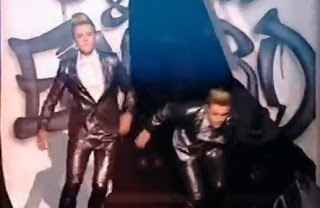 They’re performing at Revenge this Friday, apparently. Maybe I’ll go so I can shout “Enjoy your trip six weeks ago?” and then feel very very witty.
See you next year for more televised karaoke and premium rate phone voting fun.

Yummy Tin Drummy
The BBC have disgusted me today