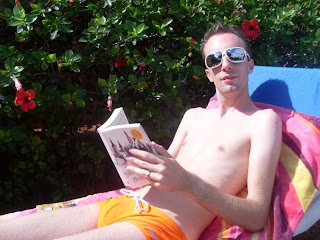 I had a lovely time in Gran Canaria, and the weather did indeed stay nice for us. It was closer to 80 degrees sometimes I think, so I was even grateful for the bit of cloud we had towards the end of the week.

We were only there for five days, but to be honest that was quite enough for me. It’s a rare occasion now that I’d want to go out two nights in a row, so going out five nights in a row was quite a struggle for me. Thank goodness all I had to do in the daytime afterwards was lay on a plastic sun lounger in my skimpies for hours in end (see photo).
For those of you who haven’t been to Gran Canaria before, it really is your basic sun and booze holiday. There’s not actually that much else to do there, although you can hire a car and go inland if you want to, which we’ve done in previous years. But all we did this time was get up late, sunbathe, go out for dinner at reasonably priced restaurants where you have to sit on patio furniture, drink vodka from the Spar, and then go out bar hopping around the Yumbo Centre. It was great. The only thing that could have been improved really was that there weren’t that many fit boys there this year. There were some, mostly fit waiters, but I think some people have been put off by how expensive the euro is right now. Plus of course it was half term, and what kind of fool goes on holiday in half term unless they have to? Such is my lot as the wife of a teacher.
Oh yes, and the other thing that could have been improved was that they could have put a tent over the whole island and fumigated it before we arrived. I got SO many mosquito bites! I had about 20 in the end, and some of them have only just gone down. So with them, plus the cockroaches who occasionally scuttle across your bungalow floor, I’d had quite enough of insects by the time we left.
Our accommodation was nice, we stayed at Club Mancha which is right by the Yumbo Centre where all the gay bars are. It’s a small complex of about 12 bungalows around a pool. The staff there were really friendly, and I couldn’t fault it really. I’d definitely go there again, but having been to Gran Canaria about four times now I think maybe we should try another destination next time we go away.
I was exhausted by the time we got home from all the going out, so it is actually sort of nice to be back at work where I can sit down all day and drink tea. I’ve got a bit of tan but not loads as I didn’t want to burn, but at least it has given me a bit of colour for the winter. Chris, of course, has turned into a sub-saharan African again because he tans really quickly, so he’ll probably still be tanned long after mine has faded. It’s a shame I can’t really pull of Nicole Kidman-esque pale beauty, it would be so much easier for me! I just go pink in the sun. No danger of that though now that I’m back. Still, Christmas is just around the corner, so I shall look forward to that now instead.