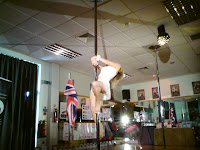 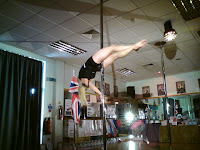 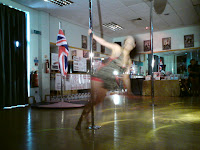 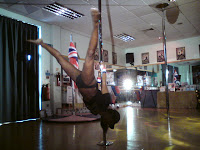 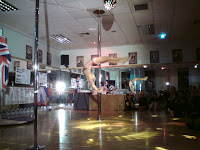 Yesterday I had the unusual experience of going to a pole dancing competition to see one of my friends compete for the title of Miss Amateur Pole Dance UK. It was up in Burgess Hill (it wasn’t a huge event, hence the not particularly glamorous location) and my friend had come all the way from Birmingham to compete, so we felt it was only right that a few of us should go along to cheer her on.

And it was really fun! They had 11 girls compete, and they seemed to have come from various places around the country to enter. I think the only stipulations were that you had to have been pole dancing for less than a year and that you weren’t a ‘professional’, i.e. didn’t work as a pole dancer in any capacity. They kept reiterating that the emphasis was very much on fitness and fun and dance, rather than it being a sexy showcase, which is probably why it was in a leisure centre at two in the afternoon. All the girls seemed to be doing pole dancing for the same reasons as our friend anyway, as a hobby and for the fitness side.
Actually it was meant to be 12 competitors, but one foolish girl made the mistake during the introductory bit of answering “So how long have you been pole dancing?” with “Two years”. “Oh,” said the hostess woman. “Well you can’t compete then sorry” and she was disqualified then and there on stage! Bit humiliating really, they should have asked her that question earlier… They still let her dance at the end, but only as a ‘showcase’, she wasn’t in the competition.
The girls all performed really well, with a bit of variation in ability, and it was obvious once they got going that it’s not as easy as you might think it is. I for one do not fancy trying to suspend myself in mid-air using only the power of my thighs clutching a pole.
Our friend Jennie (third picture, in the camo dress) performed really really well, and did a nice routine to Jordin Spark’s ‘Battlefield’, with a matching outfit and everything. She didn’t win, unfortunately, but there was very little in it, and she was a lot more graceful than most of the other competitors.
After the girls’ competition there was a Mr Pole Fitness competition, which they touted as the first time they’d had a male competition, but they said they thought the sport was ‘ready for it’. Obviously not that ready for it, as they only had four competitors, including one man who had been strong-armed into competing from among the audience. The guy who won had come all the way from France, and I think he may have been expecting a slightly larger competition than the two joke entrants (a milkman and a barbarian) and a guy in jeans. He won anyway, because he could actually dance and do some quite difficult moves on the poles.
And then the current Miss Professional Pole Dance graced us with a performance to close. She was obviously very good, and whizzed round and round on that pole in all her skinny bikinied glory.
It quite made me want to try pole dancing actually… I think the greater upper body strength that men tend to have might be quite an advantage for some of it (especially shimmying up the pole). So who knows, maybe that Mr Pole Fitness 2010 title has got my name on it…