The X Factor has finally progressed beyond its endless parade of mentally impaired and recently bereaved people, to a stage where you start to actually know who some of them are. Yes, it’s the Judges Houses, and from a pool of thousands of delusional retards we’re now down to 24, some of whom can actually sing! It’s exciting, I know.

However, I’m not actually thrilled by their chosen selection. When they showed them all, I thought “Really? One of them is going to win? Oh.” So that’s not exactly great. There are also some that I want to kill with a claw hammer, but I suppose the X Factor wouldn’t be the X Factor if you couldn’t scream in rage at the screen from time to time.
So, let’s see who we’ve got. 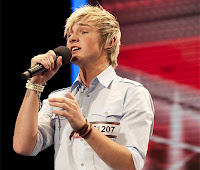 The boys – Cheryl Cole
Cheryl’s got a fair group of boys, considering I think they’re a harder group to work with as the voters don’t always warm to them. I don’t know much about Duane Lamonte, and Rikki Loney is just some boy in a hat. Ethan Boroian is sort of cute, and so is Lloyd Daniels, even if he is a bit young. He’s a big improvement on Eeyore Quigg at any rate. The other ones don’t really stand out for me, so I guess Ethan and Lloyd are my favourites. Not sure they’ve got the strongest voices though.

The girls – Dannii Minogue
This is easily the strongest category every year, so Dannii’s lucky they gave it to her. To compensate for her lack of musical knowledge or talent, they also revealed Kylie would be helping her out in picking her final three. Shame they can’t ditch funny-nostrilled Dannii in favour of Kylie completely. I don’t really know much about the girls though, because they’ve hardly shown most of them. There are a couple of quite good Staceys I think, and a girl called Rachel who fell on her face in her eagerness to get a closer look at Dannii’s nose.

The overs – Simon Cowell
Simon seemed quite pleased with his category, and I think he’s probably got my favourite act so far, Nicole Lawrence. Yes she milked the death of her Dad a bit, but she has that whole big fat black woman with a great voice thing going on which really does it for me. He also has Jamie Afro, who I can’t stand, and bizarrely has managed to find two people who can’t spell Daniel properly. One of them I hate, I think it’s Danyl Johnson, as he’s a complete and utter wank spittoon. It’s one thing to give a confident audition, but it’s quite another to completely frig yourself off on stage while shouting your own name (he didn’t actually do that, but he may as well have). He’s a knob anyway. I’m sure Simon won’t keep both him AND Jamie Afro though, they’re too similar in their wanky styles, so at least one of them should get the chop. 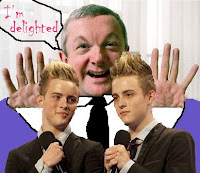 The groups – Louis Walsh
And once again, Louis has the groups. The only thing I have to say about this category, is what the FUCK? What the HELL are John and Edward still doing there? They’re TERRIBLE and they can’t sing. Louis says they ‘have something’. The only thing they’re going to have is Louis’ cock in their mouths as he forces them to nosh him off. He doesn’t even like novelty acts so what the hell is he doing? Actually, I know what he’s doing, he’s just always fancied the idea of a threesome with twins, so now that he’s got two blond Irish twins in his power he must be doing a leprechauny celebration jigdance all the way to his sex dungeon. They have to go, they just have to, in the name of all that is holy. And for child protection reasons.
So, that’s the X Factor for this year. Not thrilling, and a possibly mediocre Christmas Number One on the way. I’ll still watch it of course, and some of them may even grow on me. You never know.