It feels like the summer holidays are well and truly over now. For the first time in ages, I woke up this morning and it was too gloomy to see my alarm clock properly. It was raining outside, and the whole world looked grey. Chris has gone back to work, the kids are back at school from tomorrow, and pretty much that means it’s now autumn and the summer is over.

I’m not one of those people who bleats on about us ‘not getting a proper summer this year’ though. It’s actually been very hot at times, including very early on around April or May when it was roasting hot and I got sunburn. Admittedly, it has also been quite a wet summer, and there were long periods of howling wind and rain, but I’ve managed to get quite a good tan and spend a fair bit of time sat on the beach, so it’s not all bad.
Work will slowly start to pick up pace again now. The first students (the PGCE ones) will be starting next week I think, and then soon after that the international students will arrive, and then the freshers. I hope there are some fit ones, it has been ages since there has been any proper eye candy on campus. The university is thoroughly dull during the vacations – it’s not the best place for facilities normally, and in the holidays what little there is closes so there’s nothing at all! There’s not even a proper bar here, what kind of campus is that?? So it’ll be nice once there’s a bit of life on campus again.
We’re hoping to go away on holiday in half term, having not had a proper trip away in quite a while. We were thinking Sitges, but that won’t be all that sunny in October apparently, so we might go to Gran Canaria again with some of our friends. At least that’ll be something to look forward to as the depression of the autumn term sets in.
This morning I am amusing myself by trying out Tumblr, which is a blog engine type thing. It seems quite good – it’s mostly for sharing pictures and videos and things, and then you re-post ones you like from other people’s Tumblr pages. I was hoping there would be an easy way of importing my posts on it into here, but there doesn’t seem to be. I don’t really want to run two different blogs, but I like the way Tumblr works, and it has a prettier interface than Blogger (which is frankly quite ugly). I’ll see if I start using it properly before I worry about that anyway. In the meantime, here is a really REALLY pretty boy that I found on there. He’s so yummy that I just want to bite him. Is that weird? 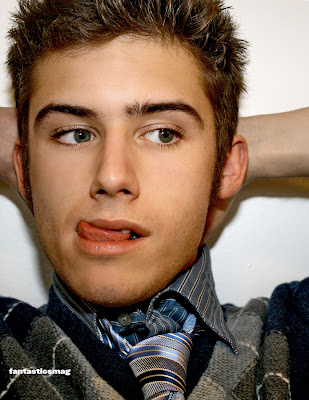