A damp and drunken Pride

It was Brighton Pride last weekend. While I always enjoy it, I’m not quite as mad on it as some people seem to be – looking forward to it all year, updating their Facebook for the month before it with “13 sleeps to go until Pride!”, and then running round ejaculating “Happy Pride! Happy Pride!” at everyone on the day. It’s quite fun, but it’s not THAT good…

This year it was slightly spoiled by the very ill-timed weather. Friday? Lovely. Sunday? Lovely. Saturday? Heavy rain on and off from 1pm until 8pm. So not great, I have to say.
It stayed dry for the parade at least, as it would have been rather miserable to see the rain slowly dissolve people’s papier maché outfits into sloppy goo. They said it was the “biggest and best parade ever”, but they always say that, and I found most of the floats rather mediocre. Lots of the gay bars who normally do floats didn’t even bother this year, so it was primarily political parties, public services, and a couple of banks.
The Conservative Party excelled itself though by having some of the fittest boys on their float, including a rather nice one in red shorts. He spotted us taking lots of photos of him (and then catching up with the float later on and taking some more) and he waved lots in an appreciative manner. 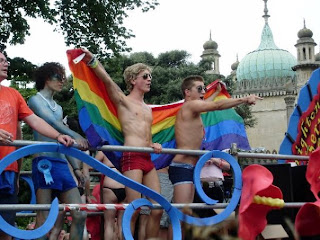 I was rather disappointed to see that the Labour Party parade people, aside from being exceptionally sub par in appearance, were wearing stupid red t-shirts that proclaimed “Never kissed a Tory – never will.” So pathetic! What has that got to do with Pride? And they clearly hadn’t seen the boy on the Conservative float before making that commitment… I’d kiss him. I’d kiss him good. But honestly, it’s ridiculous the amount of negative campaigning Labour supporters indulge in – half the time they don’t even mention their own policies, they just campaign on a platform of ‘You have to vote for us or the mean old Tories will get in’. Tsk. Anyway, I digress.
We did go up to the park for a while, but after sheltering from the rain in the Wild Fruit tent for 40 minutes we decided it wasn’t really worth the effort and we bailed out.
The street parties in the evening are always much more fun anyway, and as usual ours was one of the roads they closed for it. It’s ever so convenient to live just upstairs from all the action, and it’s rather economical too as you can just bring your own drinks from home. So we spent a fair bit of the evening just wandering around Kemp Town checking out hot boys and emptying out our drinks cabinet.
The mixture of champagne, wine, vodka, cookie dough-flavoured shots and cider did take its toll on me though, and by 1.30am I was rather out of it. I remember being sat on the kerb on my road for quite a bit, while a girl angrily told me that the pollips up her nose were preventing her from taking her coke. I didn’t really like that, so I staggered off to bed, and was fortunately too drunk to care about the remaining noise from the street.
On Sunday I felt really rather ill, but I did manage a walk in the sun, and an alcohol-free hour or two in the daytime street parties they have on the Sunday afternoon. I did my usual thing of swearing off booze for a while, but it only lasted until 9pm when I had a glass of wine “to finish it up because it’s open” and “to help me sleep” (both good excuses).
It wasn’t the best Pride I’ve been to, mostly because of the rain, but it was quite good. It made us appreciate our flat and our location a bit more again too, so I think we might stay put a bit longer before we worry to much about moving.