In the end there wasn’t really any drama to report from yesterday’s Christmas do. Nobody was sick, nobody was asked to leave or told they were making a scene, and Abby didn’t even do the skit she’s been preparing for the last 8 months.

We had a nice meal though. I had tikka halloumi kebab for my starter, and then my main was potato rosti topped with spinach topped with a poached egg topped with melted cheese, which was yummy. And the dessert was doughnut straws with chocolate dipping sauce and vodka sozzled cheeries, mmmm. Plus we got a good half bottle of wine each, and it was all free! Well not free, but I’m not paying, and that amounts to the same thing.

I also had a new and enjoyable experience at the restaurant (no I didn’t put my hand in anyone’s bra), I fed a baby for the first time: 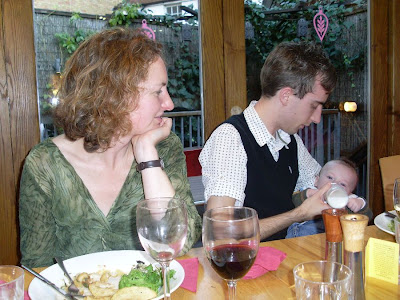 It’s only the second or third time I’ve even held a baby, so I was a bit unsure what to do when it came to combining holding AND feeding. I was assured though that if I just shoved the correct end of the bottle into his mouth and tipped it up a bit, he’d know what to do. Luckily for me he seemed more experienced than I was at it. I actually really liked it, and he was very good and wasn’t sick on me. And then he sat on my lap for quite a while and occasionally tried to hurl himself off sideways through general wriggling.

While I don’t think that I’m anywhere near wanting a baby properly yet, I did enjoy having one for half an hour, and it made me think that maybe I will want one at some point. For now though I think I’m happy with occasional cuddles and feeding of other people’s babies, with the option of giving them back if they start to make unusual noises or turn green or anything. I think I’d make a good uncle for a start, and then maybe a dad in five years or so, or whenever I’m ready to give up on all the selfish aspects of my lifestyle in favour of a small pink blob wrapped in a blanket.

Anyway, after our meal a few of us went for a couple of drinks at the pub down the road, and then people slowly trickled off until there were just four of us left. Then by 9.30 we’d had enough too, so we mooched off home WITHOUT being asked to leave, so clearly an improvement on last year.

I was in work at 8.15 this morning, feeling fine (good old vodka, always my friend), and now I’m just dossing around waiting for our email and internet to start working properly again. It sort of works, but the internet takes 5 minutes to load any pages, and everything is just very slow and intermittent. So I am plumbing new depths of unproductivity today!