Halloween, brought to you in spoooooooookyvision

Hmpf, well I’ve calmed down a bit since my 2am rage, but I’m still not happy about it. Daniel and Eoghuoauon got more votes than both Austin and Rachel? Really? Really?? What’s wrong with the British voting public? This is surely a serious argument against universal suffrage; if people vote like this on the X-Factor, can they be trusted to vote for a government? Maybe you should have to sit a sanity exam before you can register to vote, I might run for parliament and suggest it.

Anyway, I had a marvellous end of week and Halloween weekend. I was off work Wednesday – Friday (two day weeks rule), and we had some friends down for the first couple of days so we went and did lots of nice things like eating out, shopping, going for drinkies, letching shamelessly at hot bar staff, and flashing CCTV cameras in bar toilets.

Then Friday was the first part of our Halloween Extravaganza – Halloween Super Dynamite Boogaloo. We made loads of effort with our outfits this year, and I’m really glad we did because lots of people had really really dressed up! Chris was the Joker, very topical this year, and had excellent make-up, and as an accessory to that I went as Robin. Robin is not the sexiest of outfits (I was a traditional Robin rather than a Chris O’Donnell one), and I did verge on the Rodney Trotter Robin, but I think the outfit was still a triumph, especially as it was all homemade. Several people said to me “wow where did you buy your outfit?”, which is surely a ringing endorsement. 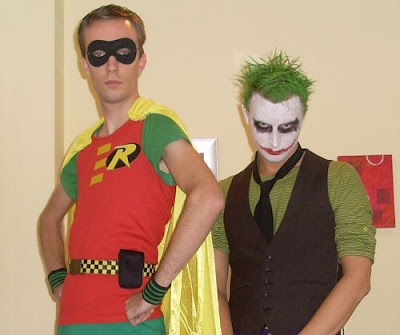 Halloween Boogaloo was good, especially as so many people had made the effort to dress up. I have to say it was freeeeeezing weather for hotpants and a t-shirt though, and I was particularly annoyed to arrive at the club after 11 (supposed to open at 10.30) only to find they had not even opened the doors yet and we had to stand outside for 10 minutes while my legs went slowly numb.

Then on Saturday we went to a friend’s Halloween House Party, where we bobbed for apples (much harder than it looks) and played slightly disturbing Halloween Twister. We re-used the same outfits of course, it’s not every day you get to wear a metre of yellow satin, and a Catwoman turned up at the party so we had a bit of a theme going. I think girls can be a bit lazy when they dress up actually, they’re always witches, cats, naughty devils, or occasionally bunnies. Where’s the imagination ladies??

And Sunday was my and Chris’ 10 year anniversary, bless. I don’t know where the time has gone. Actually I do know, it’s gone on a year of A Levels, a four-year degree, and five years of young professionalism, but it still feels like it’s whizzed by. I’m just glad we both managed to remember the anniversary this year, one of us has forgotten for the last three (me twice, Chris once) and I was determined not to let it happen for such a big one as the tenth.

And now it’s back to work and it’s all rather dreary. On the upside, we are unexpectedly going to see Alphabeat tonight, which should be fantastic, and tomorrow is the US election about which I am soooooooo excited. I may get up at 4am to start watching the results come in. I’m not sure why I care this much, it’s not like I live there, but it is important and having read about it constantly in my Economist for the last year I feel pretty invested in it. Go Obama! You’re a bit of an unknown quantity, but what the hell, let’s spin the wheel for a change.

Blogged with the Flock Browser